~Friday~ I got my first-ever “cut on the Cape”—a haircut, that is. Bob did it using our new clipper set, which includes a vacuum and trap that catches the hair while it trims. 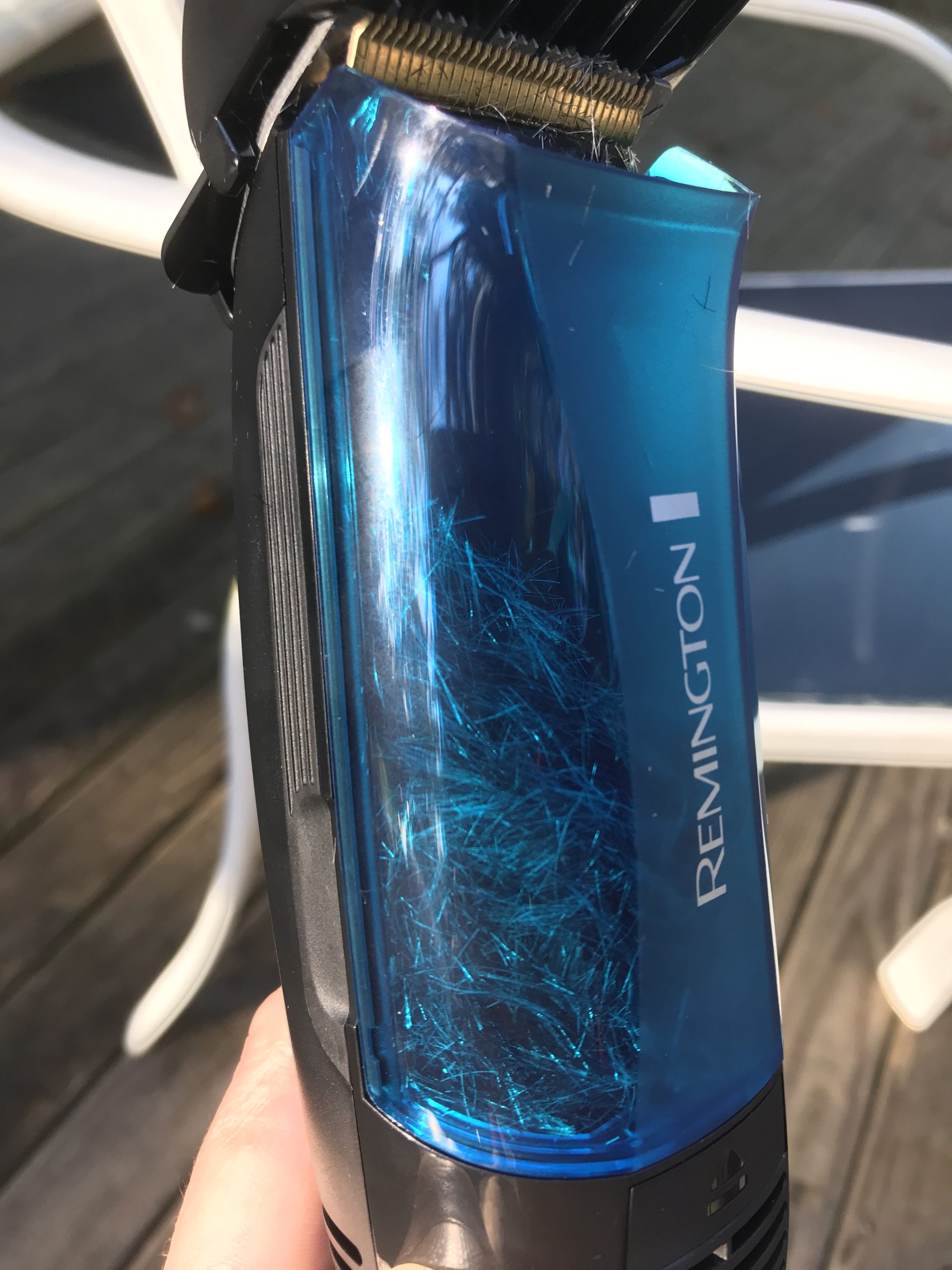 That must be a “sample” of gray hair that came with the clippers to show you how the vacuum works.

At a little after 9 a.m., we headed south to Yarmouth, where we stopped at Target before going to The Edward Gorey House, which opened at 11 a.m.

For those who don’t know: Edward St. John Gorey (February 22, 1925 – April 15, 2000) was an American writer and artist noted for his illustrated books. His characteristic pen-and-ink drawings often depict vaguely unsettling narrative scenes in Victorian and Edwardian settings. Many people know him for his artwork for PBS’s Mystery. 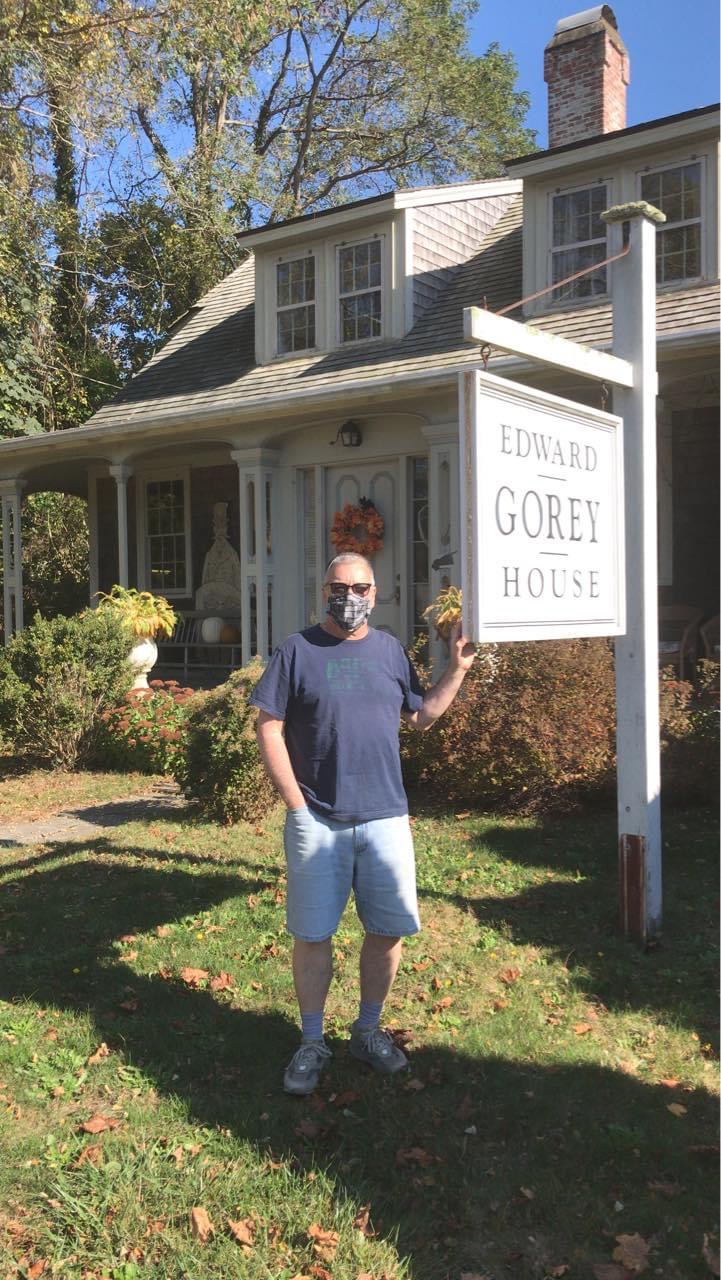 The curator was very knowledgeable and likeable and did a good job of giving us an overview of the house and the life of Mr. Gorey. In this public Facebook album, you should be able to see the just under 50 pictures I took in the museum house if you’re interested.

Upon leaving, we asked the curator if he knew where we could get some “clam cakes,” and he gave us a few possible places, from which we chose the Chatham Pier Fish Market, where we both ordered the “famous” clam fritters. 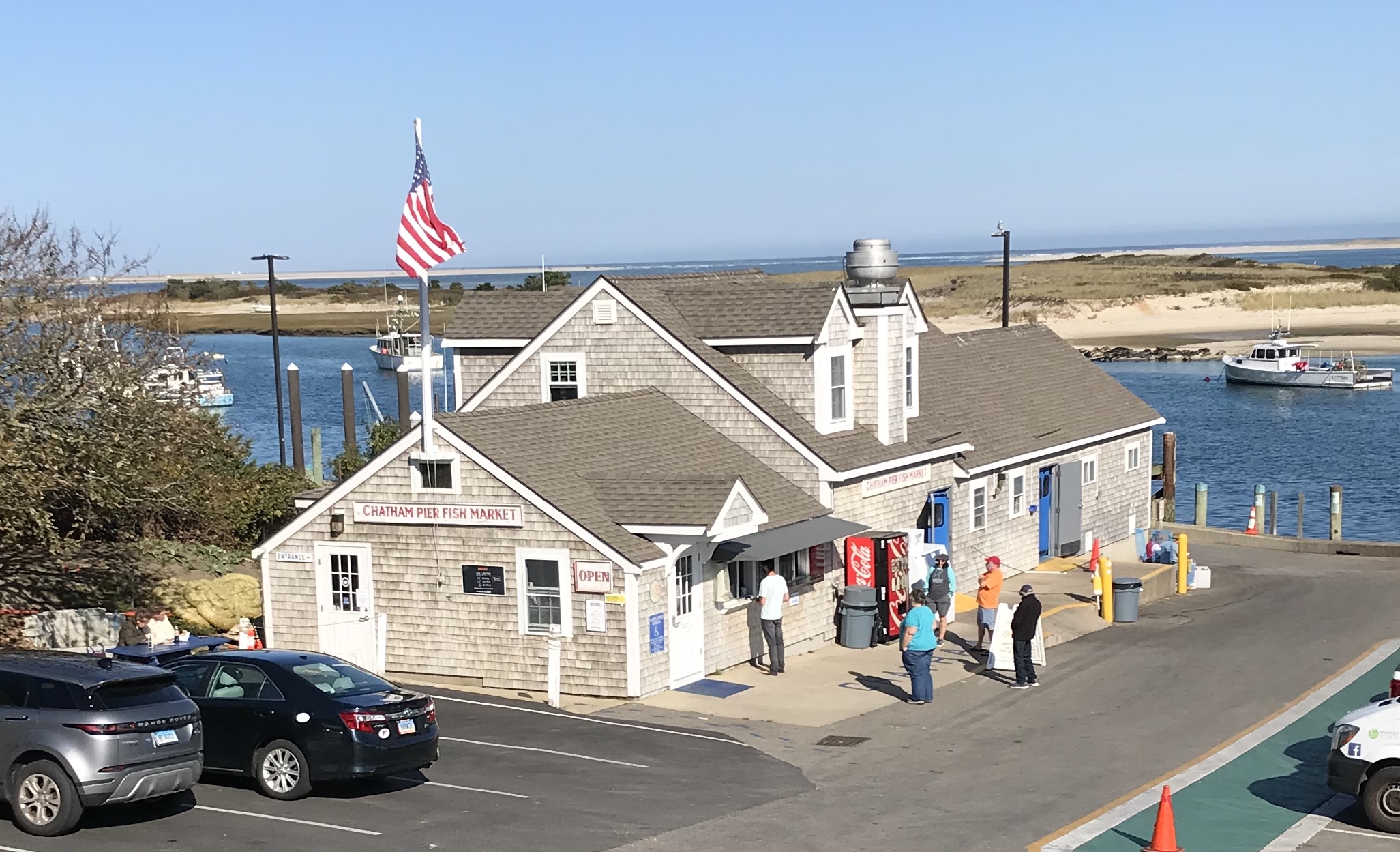 Less than a mile from this restaurant was the Chatham Light lighthouse, which a lot of people confuse with the Nauset Light lighthouse that’s on the bag of Cape Cod chips (which has a red section to it, and which we have a picture of further down in this entry), and since we were so close to this one, we stopped by for a picture.

On our drive back, we saw this amusing sign—which I at first thought was mocking my hips—as we entered into a densely populated area: 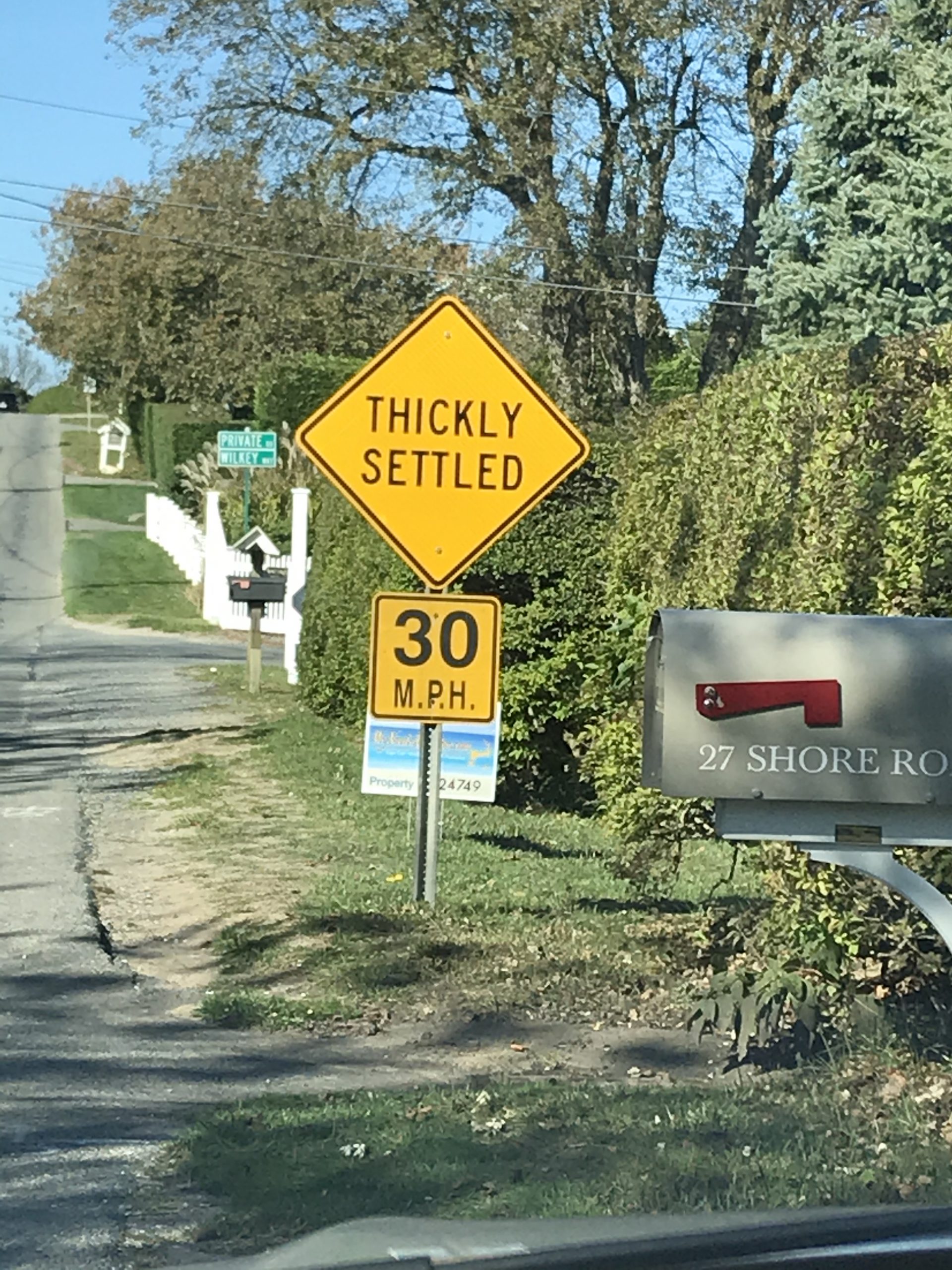 And then back in Eastham, we saw this sign, which we of course had to get a picture of, in the front yard of a house on the way to the Nauset Light lighthouse: 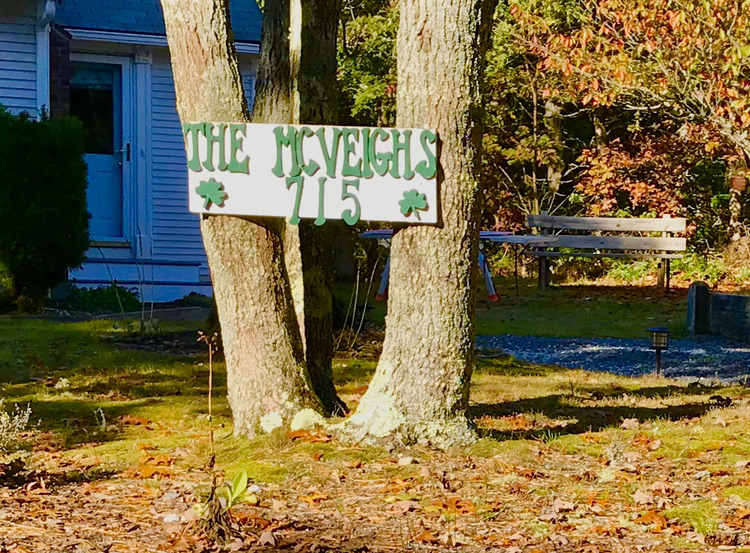 At the Nauset Light lighthouse, we used the bag of Cape Cod chips we bought specifically to use as a prop in this picture, and then I added the text to it once we got home. 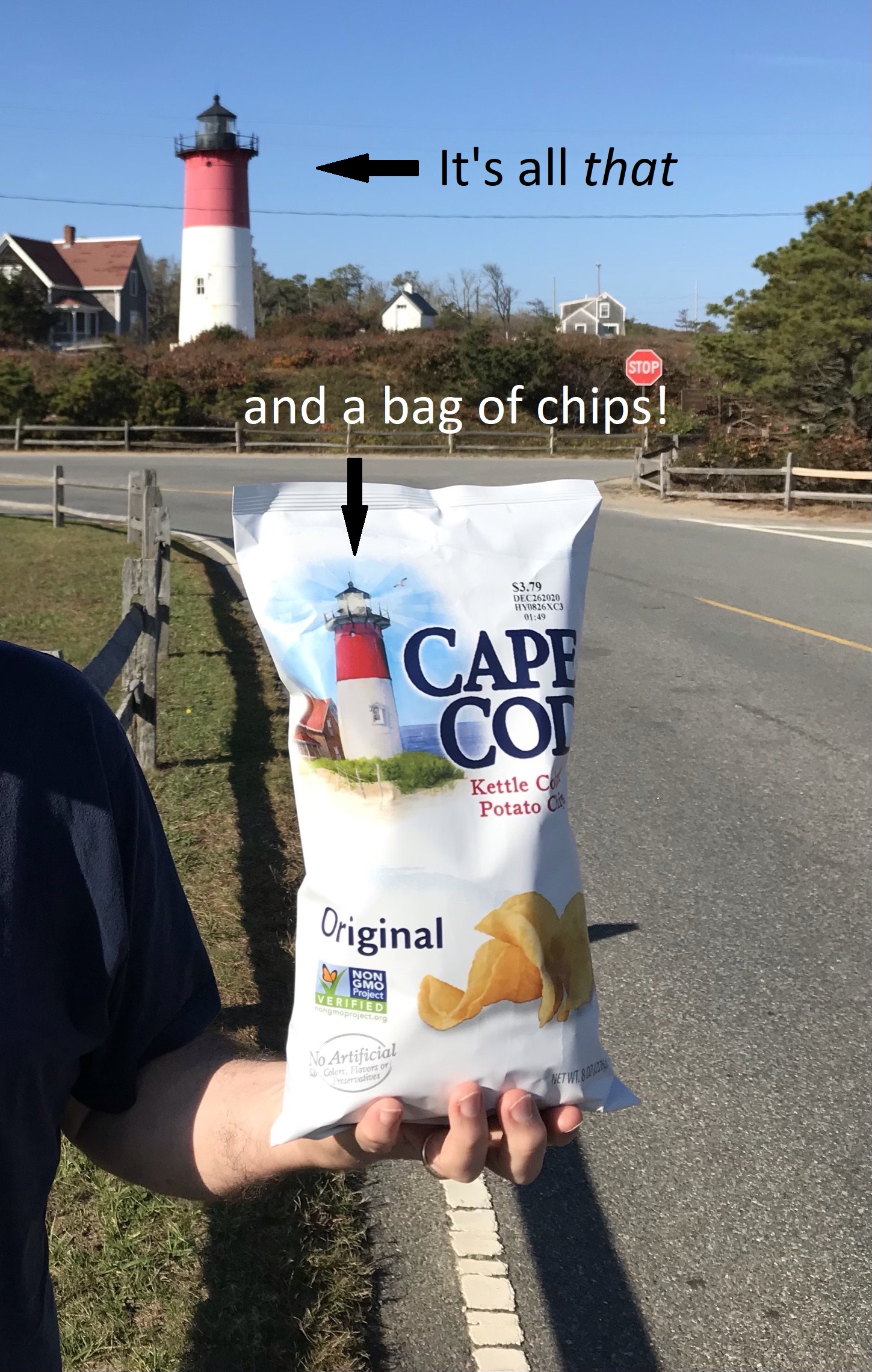 Rounding off our “clammy” day, we had some fantastic clam chowder for dinner that we bought in the seafood section at the grocery store on Sunday.

I am going to go ahead and call my first Friday off here a big success. Tomorrow, we’re planning to go up to “P-town.”

Comments are welcome about this entry in the form below. | Read our day 8 entry.
Note: Comments won’t appear right away as I have to approve them to avoid spam and trolls.