When I got inside, the line for Delta check-in must have had close to 100 people in it. Walking toward it, I remembered that I had a first-class ticket, and I glanced over at the Sky Priority line, which had about 8 people in it. I wasn’t sure if you could you use that line if you weren’t one of their Medallion-level frequent fliers, but I decided to ask for forgiveness instead of permission, and got in that line.

When I got to the ticket agent, she didn’t say anything about it, and when I saw my ticket, I saw that I was ok: 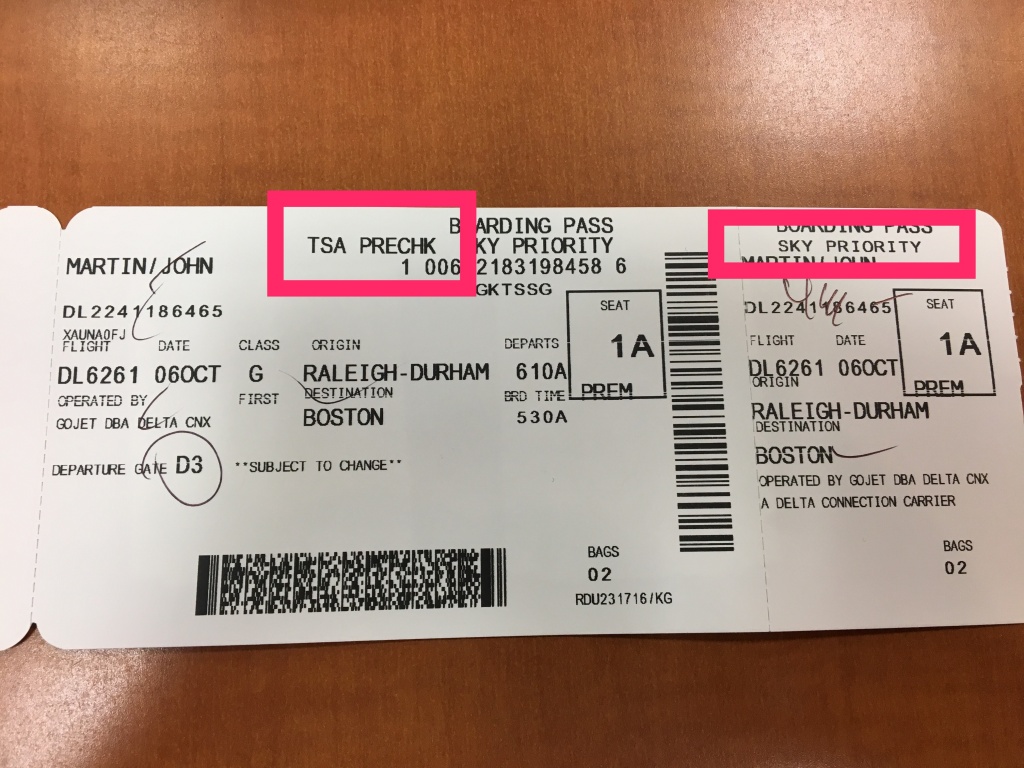 Then I headed toward security, where I found the line astoundingly long. Without exaggeration, there were at least 500 people in the line that went along one wall of the terminal, reached a corner, then ran along that wall, then once it hit the other wall, it made a “U” and snaked back up along the original wall. And this was the line just to enter the security area, where once inside, it also snaked to get to the attendant to check you through to the actual scanning area.

At that point, it was about 5:10 and I knew I was going to miss my flight in this line. Then, I noticed that my ticket was marked “TSA Precheck,” and I thought, “Oh good. Maybe I don’t have to wait in this line.” I flagged someone down to ask, and she said, “Come with me,” and took me to the entrance for the pre-check folks, which had virtually no line.

Once on board, the pilot came out to greet us and said, “I’m glad those of you who are here made it through that security line in time. I’ve been working at RDU for 9 years and I have never seen the line that long when it wasn’t the day before Thanksgiving or Christmas.”

On board, I was thrilled to find out that my 1A seat was by itself, as it was a smaller plane with one seat on one side of the aisle and two seats on the other. And then, bonus, no one ended up sitting in seats 1B and 1C. This was a relief, because I have a cold and I was afraid I’d be getting evil eyes if I started coughing during the flight.

There was a man behind me with 2 kids, who was incredibly annoying. He couldn’t sit still. Before we even left the gate, he got up three times to get something out of his carry on, which was stored in the overhead bin across from me. The third time, he pulled out some headphones that were bigger than his head. After sitting down for about 2 minutes, he got up again and went to the flight attendant area to get a paper towel, with which he started wildly cleaning the screen of his iPad. During the flight, he twice walked up to the flight attendant’s drink and snack cart to request one thing or another—after having already been served at his seat.

We landed about 15 minutes early, and my baggage came out fairly quickly. I never pay to check a bag, but I got two free bag checks with my ticket, so I took advantage of it.

THE BUS RIDE FROM BOSTON TO HYANNIS

At the ground transportation place where I was catching the Plymouth & Brockton bus to Hyannis at 9:15, the 8:15 bus was still there since it was 8:12, and when I showed the guy my ticket he said, “The tickets are good for any bus, so you can get on this one; there’s still room.”

I took the front seat on the passenger side, so right in front of the entrance door. We made 4 more stops within the airport and each time people started boarding, I coughed to signal that I had a cold, which kept everyone moving past the open seat next to me. At the last stop, the bus was starting to get full, so a man took the seat beside me anyway.

He was a bit of a bigger guy, not huge, but big enough that his right knee rubbed against mine when he said down. He immediately started rocking back and forth in his seat, and after a few minutes he said something that I couldn’t hear, but it turned out not to matter, because he wasn’t talking to me—but to himself. I thought for a moment that he might be “on the spectrum,” which would of course would have been fine.

To my surprise, after a while, he asked the bus driver, “Is Plymouth & Brockton hiring any drivers?”

To which the driver responded, “Do you have your CDL?”

The conversation turned into a long one that devolved into various aspects of working for Plymouth & Brockton including route selections, wages, vacation, and medical benefits.

THE FERRY FROM HYANNIS TO NANTUCKET

I alighted at the Hyannis stop, and the bus driver announced that there was a black courtesy phone inside the station to call the steamship authority for a free shuttle to the terminals. I picked up the phone, which rang 3 times and then went busy. I asked a lady in the nearby information desk about it, and she said, “Darn it. That phone is out of order again. Let me call them for you.”

The van picked me up, and after driving for a minute, the driver asked, “Are you on the 11:35 to Martha’s Vineyard?”

“Oh, you must be on the Hy-Line Ferry. This shuttle is for the Steamship Authority boats only, and I’m not allowed to drop passengers off at the Hy-Line. You’ll have to get off at our stop and walk over to the Hy-Line Ferry area.

“Oh, I’m so sorry. I didn’t realize there were two different places there. I’m happy to walk the rest of the way.”

“It’s not that far, really,” he said sounding a little guilty that he’d come across so harshly.

“Well, maybe I could cheat just this one time and drop you off over there,” he said.

Although I already had a printed reservation with a barcode on it that I assumed could be used to check in on the ferry, I went to the window at 11:10 to confirm with a human being.

She made the switch, put a $7 credit on my charge card, because I had upgraded to the “Captain’s View” on that boat, but it wasn’t available on this boat, and I ran to the ferry. My ticket got rejected because she’d printed a 12:35 ticket instead of an 11:20 ticket, so I ran back to the window to exchange, where the clerk apologized profusely, because she knew it was about time to leave.

It was a very pleasant, one-hour ferry ride to Nantucket. There were several adorable dogs on board. Here’s one: 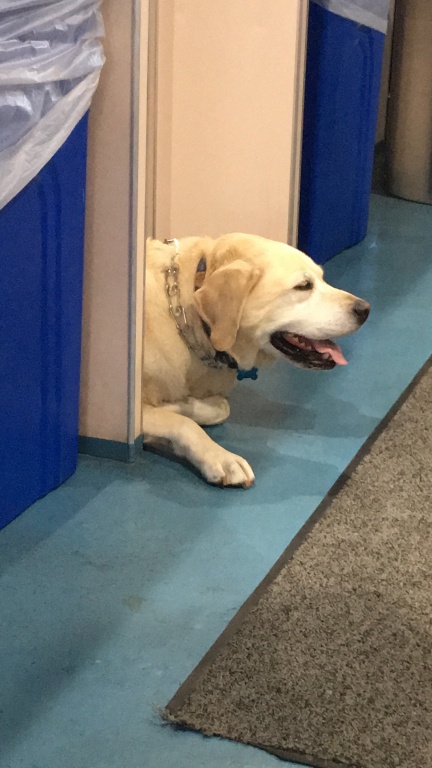 I resisted getting anything to eat at the little snack bar on board, including a several-minute debate with myself about a Bloody Mary.

It took longer than I would have preferred for me to get the free shuttle to The Nantucket Inn, as two people at the wharf gave me bad information about where I was to pick it up. Finally, after calling the hotel and getting accurate information, I made my way over to the correct place to pick it up.

Although check-in time wasn’t until 4 p.m., I was given my room right away. It’s a cute little room: 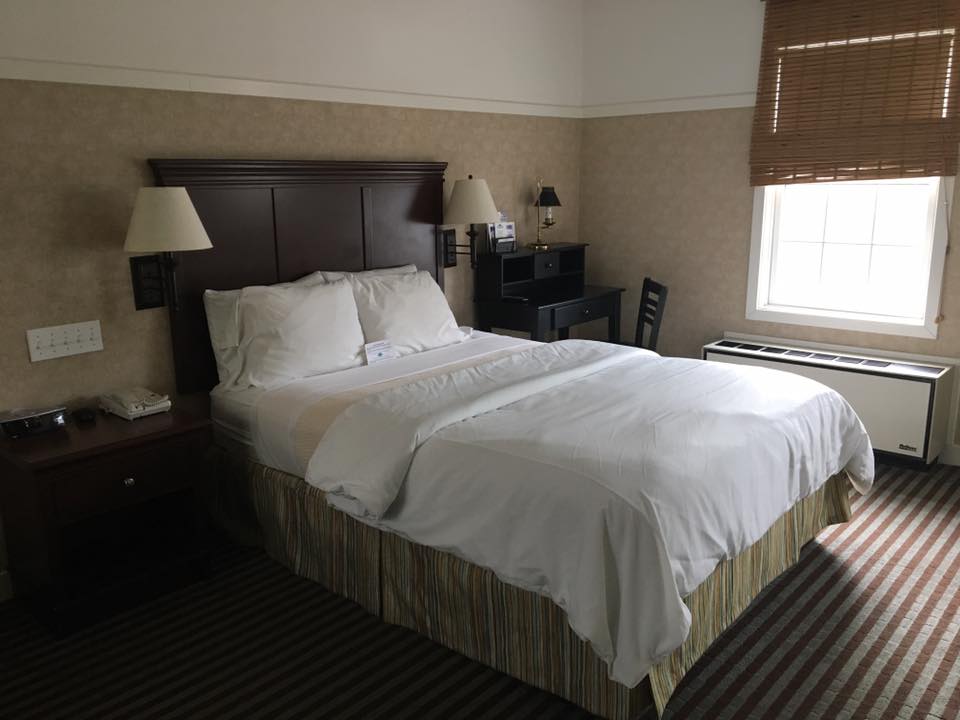 And after settling in, I walked one mile to a liquor store to buy some bourbon. On the way, I stopped into a little mart I passed to see if they had any seltzer water, which I’d pick up on the way back instead of at the liquor store (if they had it) to save me having to carry it for a mile-and-a-half.

A little further along the way, I passed this little park with fabulously green grass, and some cool statues. Here’s one: 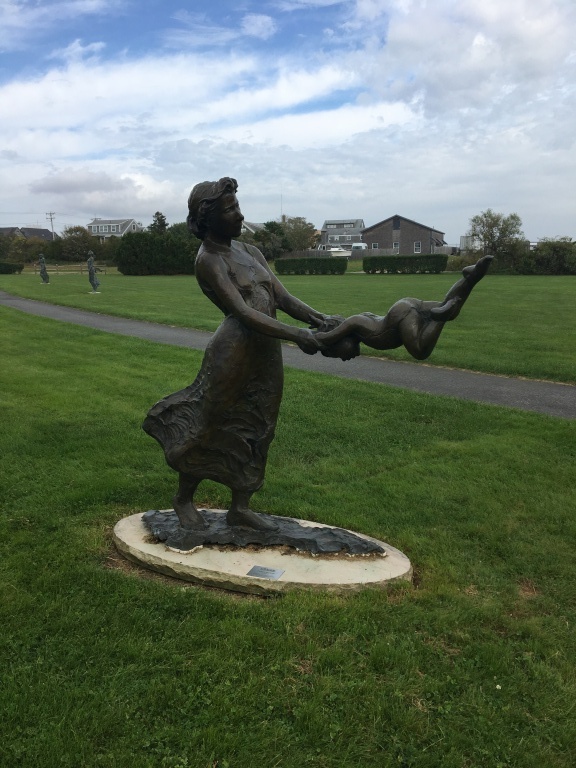 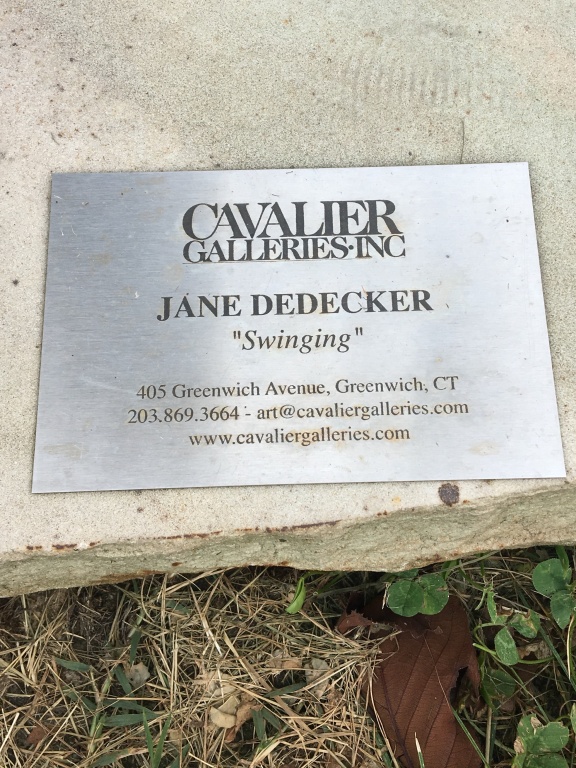 The Canadian Club bottle that’s regularly $22 in Raleigh was $29 here, which was probably more than it should be, but less than I expected it would be. On the way back, I stopped and bought the seltzer water and some salty snacks—Cheetos and Cap Cod potato chips.

HAPPY HOUR WITH TOM AND HOLLY

After pouring myself a cocktail and eating some Cape Cod chips on Cape Cod: 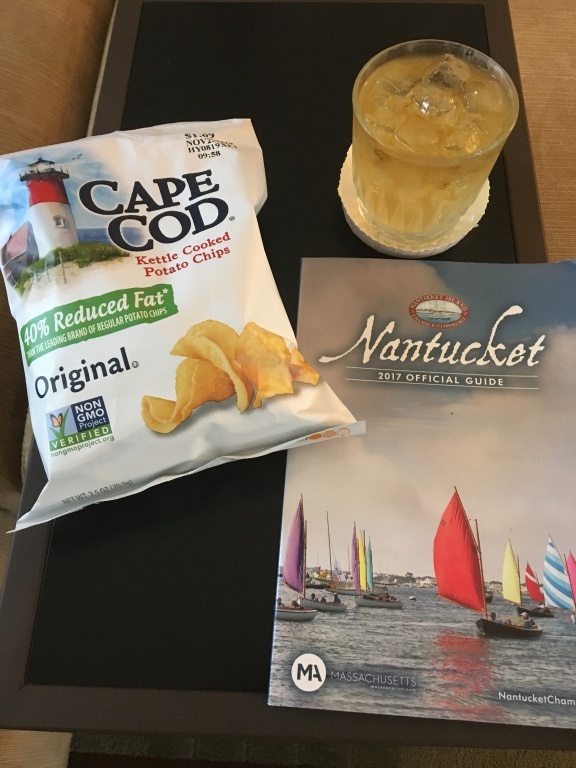 Someone pointed out that I should have been drinking a Cape Cod, too. Wish I’d thought of it!

I went outside to a little courtyard in front of my room: 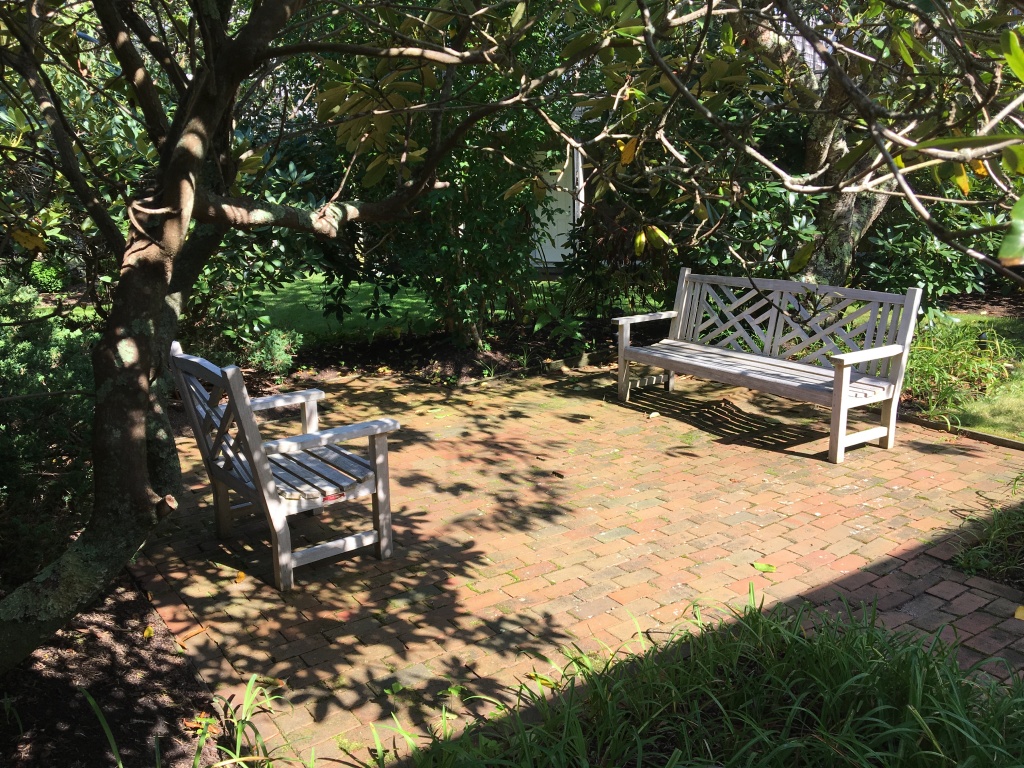 There I found Tom and Holly sitting and enjoying cocktails of their own. They were from Florida (still are) and had come up to Massachusetts to celebrate Tom’s mom turning 90 years old. Holly’d said, “Well, it’d be silly to go all the way and not enjoy a little time to ourselves, so we scheduled this part of the trip.”

They asked me if I was from around here, and I told them that I’d left Massachusetts 47 years ago, and that although I’d been back a few times for trips to Provincetown, I’d never been to Nantucket, Martha’s Vineyard, or Hyannis—not even during the first 13 years of my life when we lived in Fall River.

To which Tom said, “Ah. Fall River. Where Lizzie Borden took an ax and gave her mother 40 whacks…” and we finished in unison, “And when she saw what she had done, she gave her father 41.”

I told them about the time my sister and I put my parents up in the Lizzy Borden Bed & Breakfast, which had wallpaper with little hatchets on it and served sugar cookies in the shape of a hatchet with the sugar crystals dyed red along the edge of the blade part of the cookie.

I had dinner at AK Diamonds, a two-tenths-of-a-mile walk from the inn and recommended by them. This is what I had, and the chowder was out of this world! 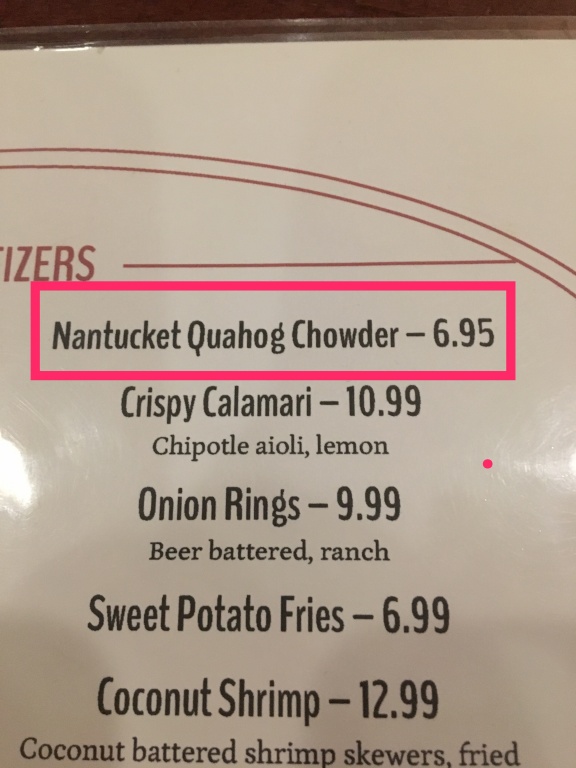 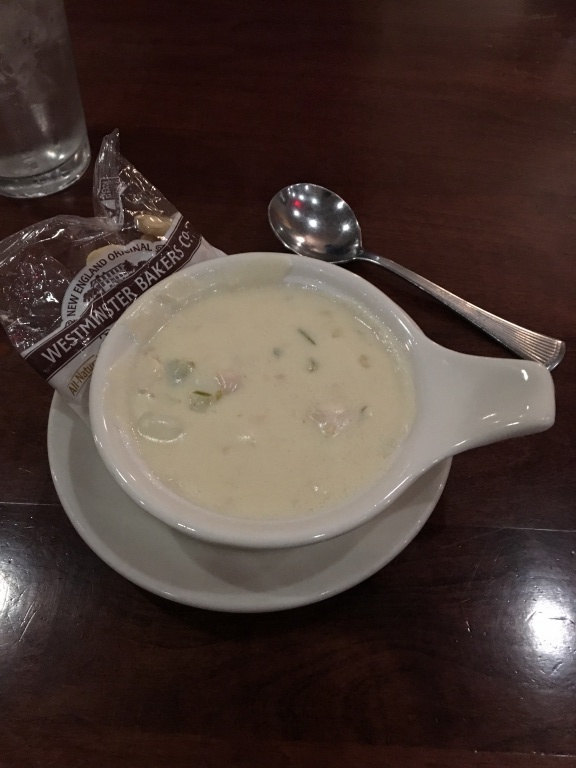 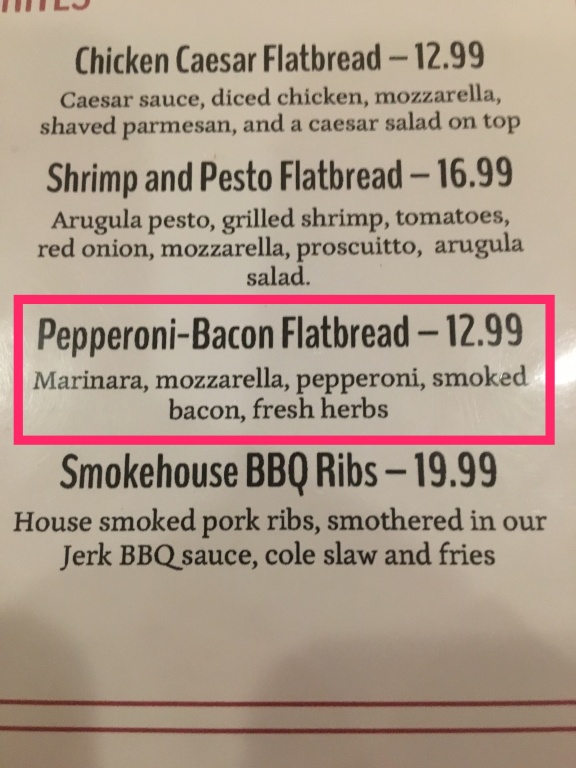 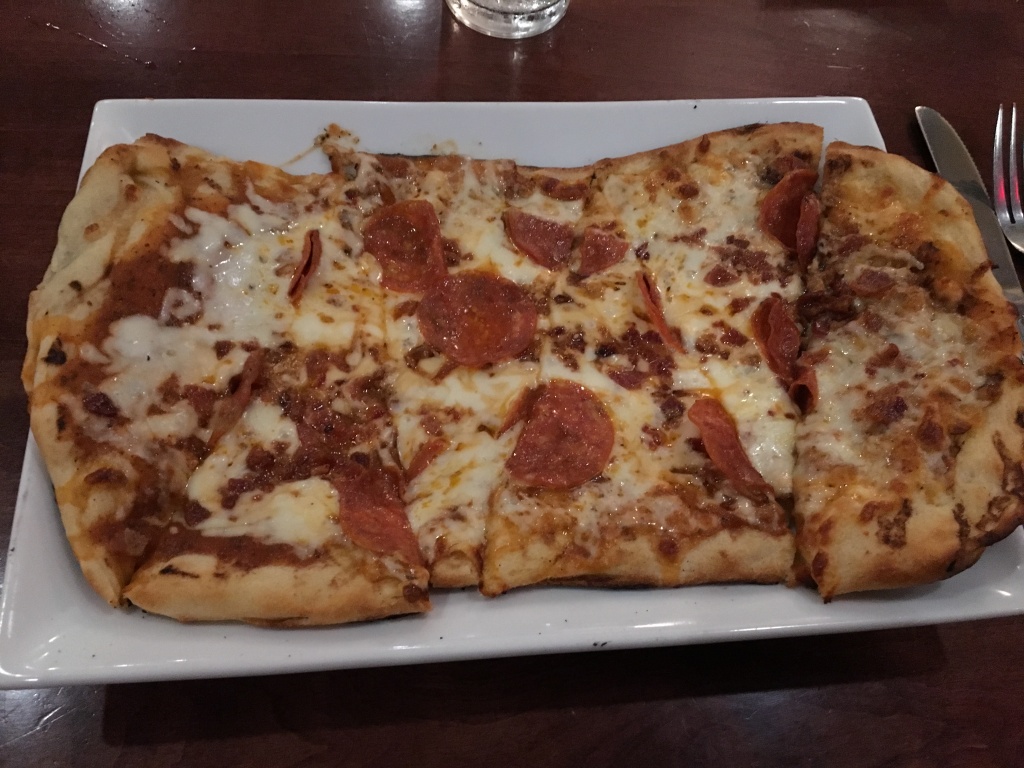 TAKING A MOMENT TO REFLECT ON MY GOOD FORTUNE TODAY

All of these things contributed to not only smooth, but unexpectedly ahead-of-schedule, travelling today:

And these are non-related-to-traveling things that I’m grateful for, too: