~Sunday~ And our month-long Cape Cod adventure—working really remotely—comes to an end. It was a nice change of pace, with seeing friends and family the highlight, and we’re thrilled to be heading back to our home—with all of its creature comforts—that we love. 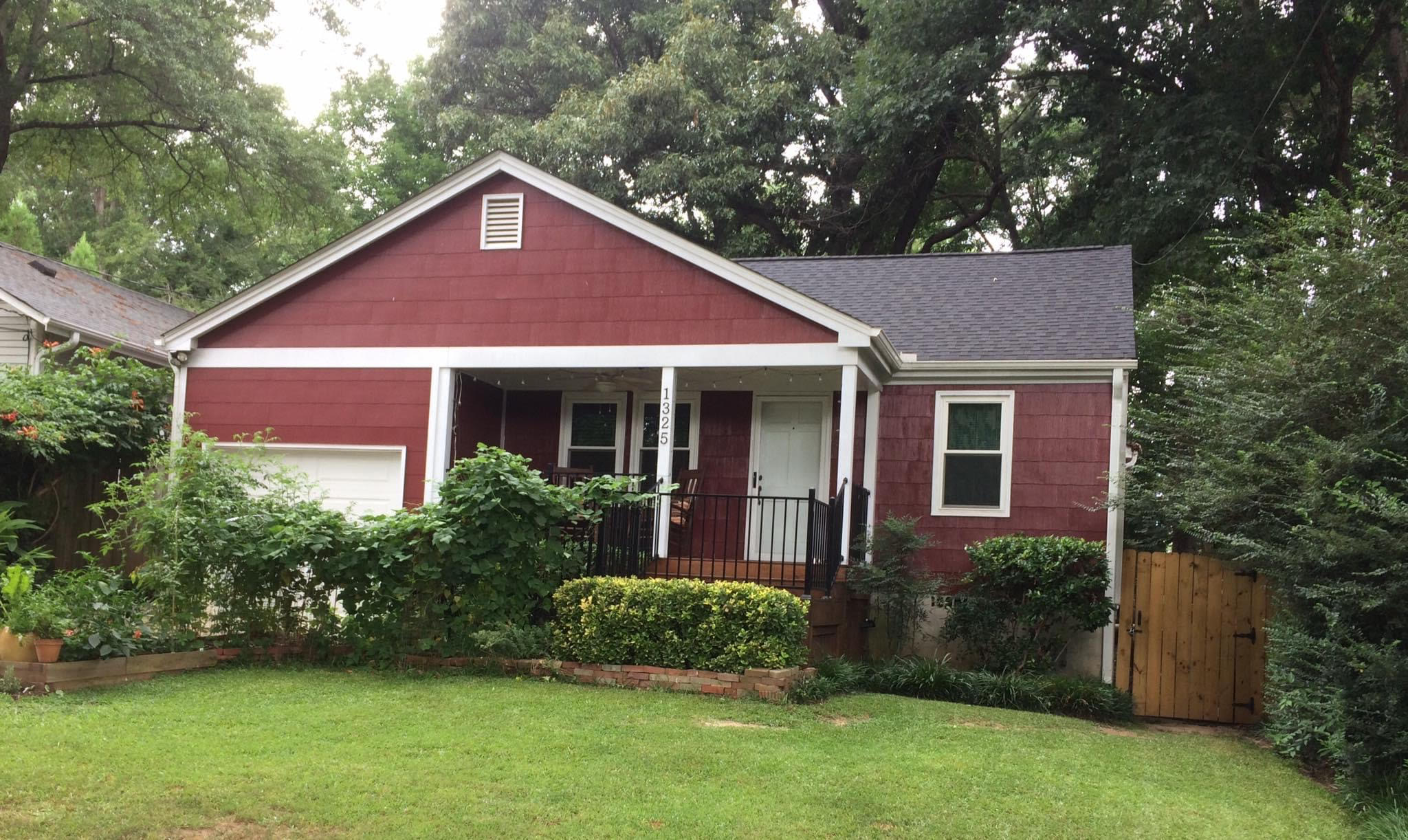 We left Eastham, MA at 7 a.m. and pulled into our driveway in Raleigh, NC at 8 p.m. It’s a long time for two gentlemen of a certain age to sit in a car, but we persevered and were lucky with the traffic and the weather.

The timer on our car tripmeter seems to be off an hour, just like it was on the way up. It was almost 13 hours to the minute door to door. We stopped for about a half hour in total, so total drive time was 12 1/2 hours.

We were surprised and pleased to learn that the George Washington Bridge toll of $16.00 is only due when entering New York, not when entering New Jersey, so no toll for that on the way home. We exited the New Jersey Turnpike at exit 6, for $16.05, and paid just a couple of other—fewer-than-$5—tolls, at least one of which was a pay-by-mail toll. 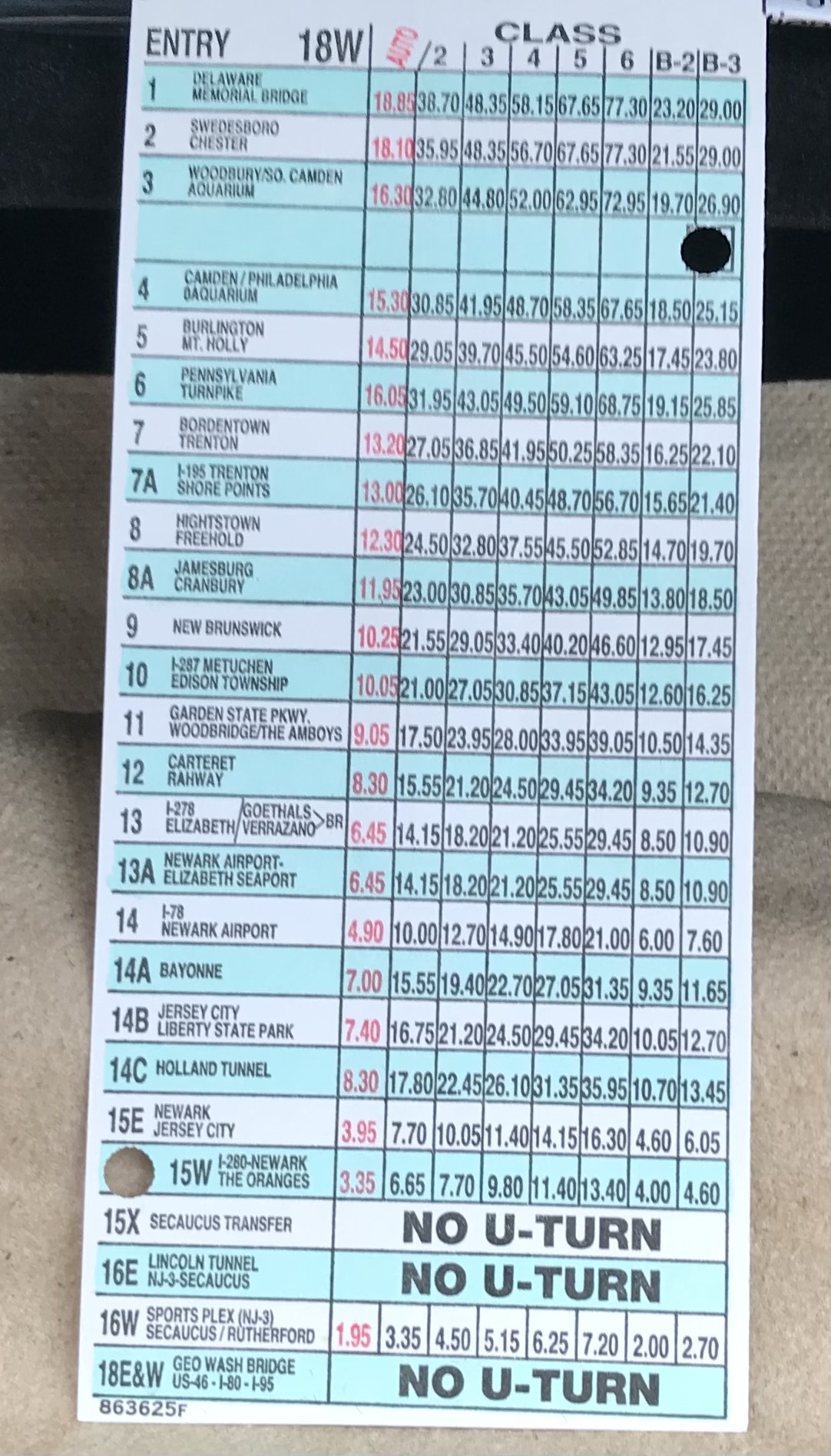 At home, we didn’t find any invoices for the tolls-by-mail that we hit on the way up a month ago, so we’re not sure what’s going on with those. We’ll pay them if/when they arrive or when we get served a subpoena to appear to pay.

We hit 2 short slowdowns—both due to police handling roadside situations—one for 15 minutes and one for 10 minutes. We pretty much sailed through the NYC stretch of I-95 only slowing down a couple of times to the actual speed limit of 45 MPH in some areas. We purposely avoided any potential fallout of the clusterfuck known as the Million MAGA March in Washington, D.C. this weekend by taking the I-495 inner loop around the city instead of 95 through the city.

We made 2 stops for gas, to use the restroom, and to eat our signature traveling dish.

My concoction reminded me of the Easter massa breads my paternal grandmother used to make. Hers actually had the hard-boiled eggs hidden inside the bread, not visible like the ones in this recipe picture. 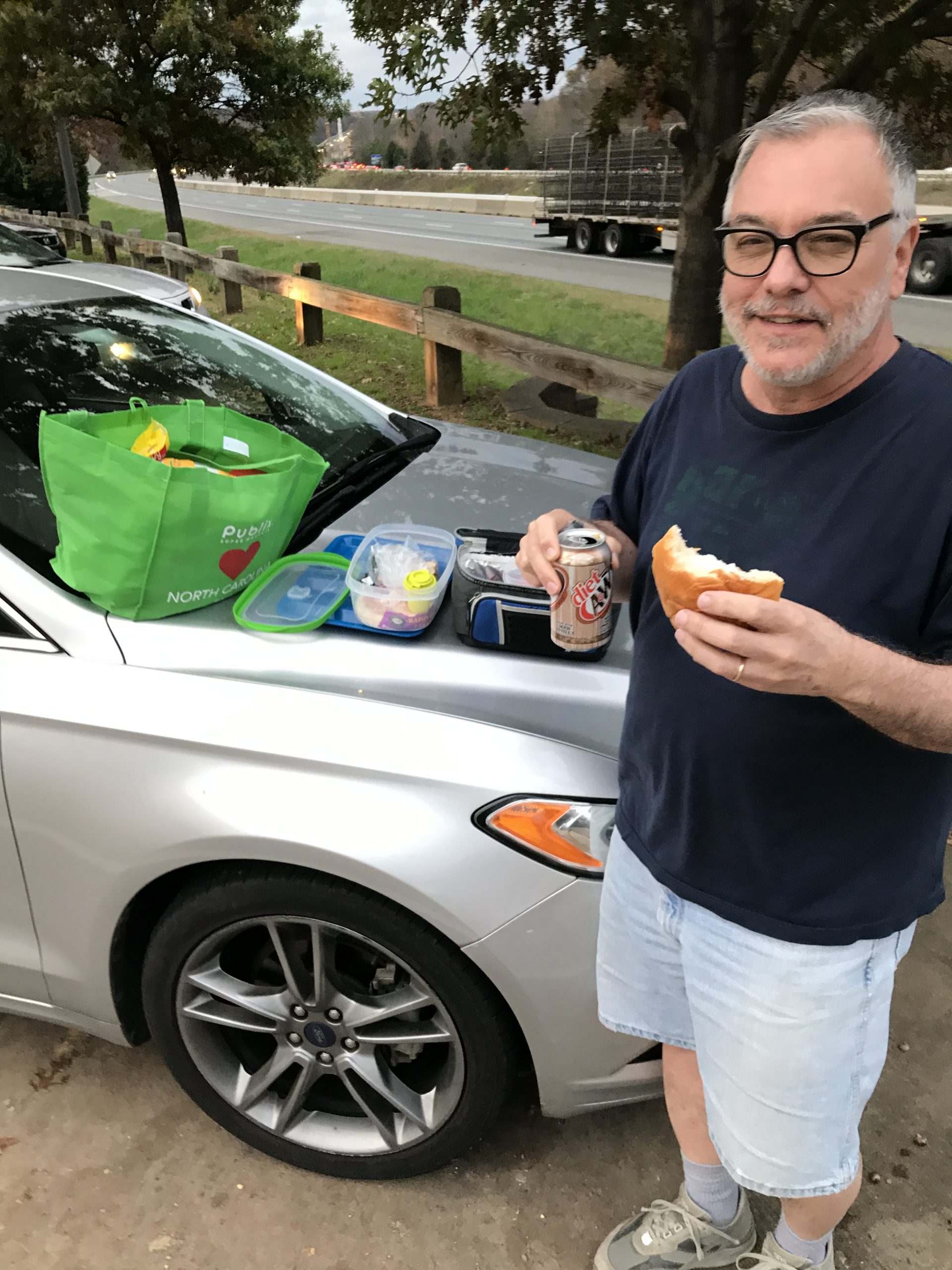 When we first walked in, our home smelled “new”—like the addition had just been finished or something—and it looked so spacious!

We unloaded the food and kitchen stuff first, and Bob started putting all that away, while I unloaded the rest of the car. Then, we both enjoyed a successful-trip-welcome-home cocktail—or two.

We both eyed “the beast in the corner,” which we haven’t cast an eye upon in a month, and then we weighed ourselves to shockingly find that neither of us had gained what it felt like we’d gained considering we’d done no rigorous cardio exercise for a month, not to mention the less-than-mindful eating we’d done. 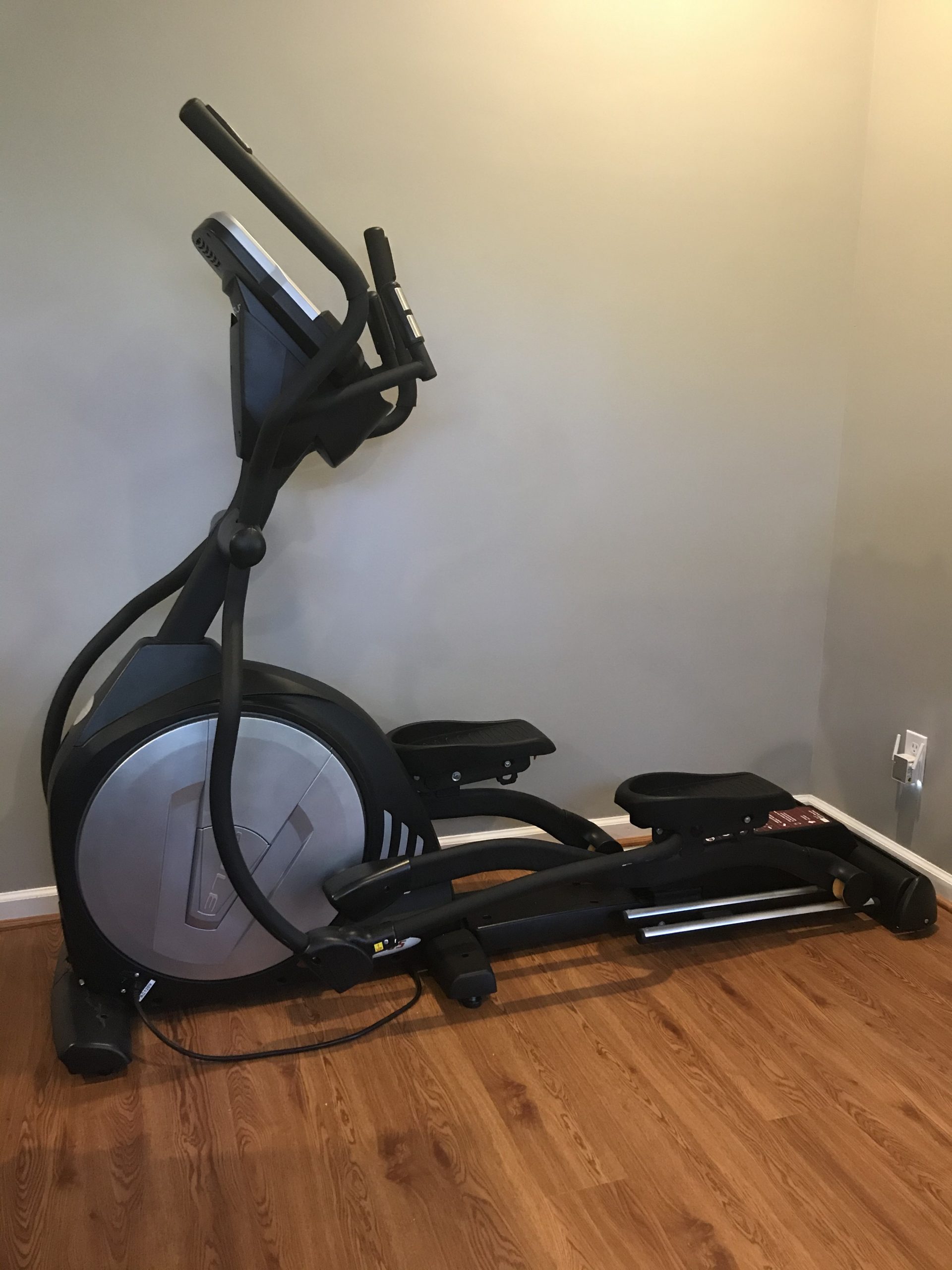 Tomorrow, we’ll get right back to it. I intend to get back into my rigorous, pre-trip routine of daily workouts: 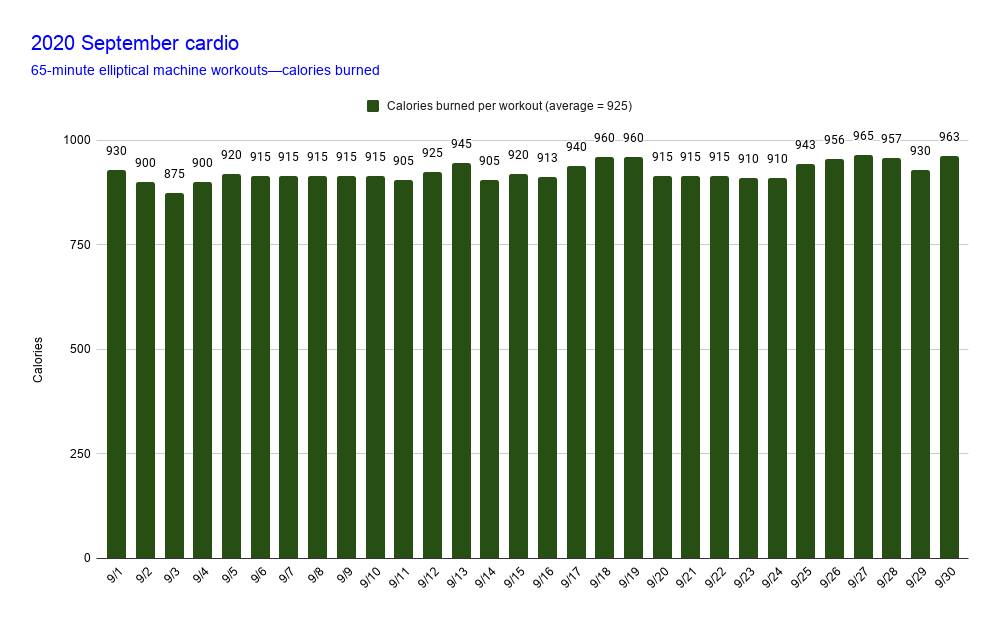 Thanks for following our adventure over the month. Comments are welcome. They won’t appear right away, because I have them set to be moderated to avoid spam and trolls.

~Saturday~ Since I’ll continue working remotely through at least the end of the year, my husband (Bob) and I are opting for a change of scenery. We’ve rented a little place on Cape Cod for a month! 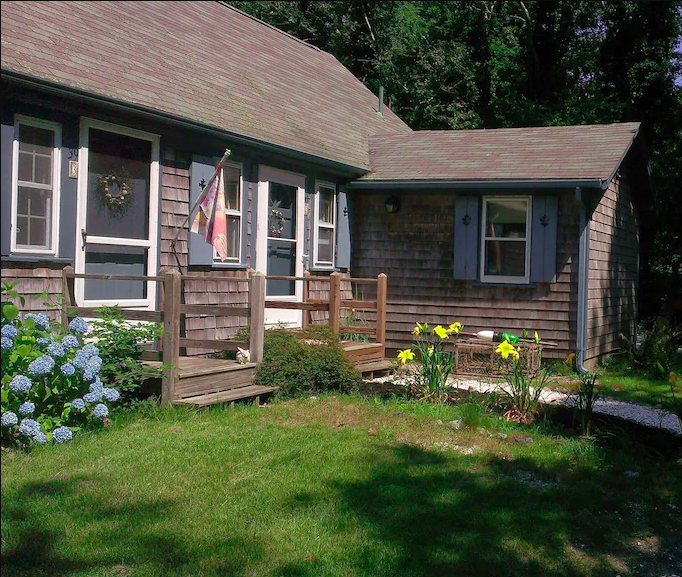 I’ll work Mondays through Thursdays and take off Fridays during this time. For Friday day trips, P-town is about 35 minutes north of us and Hyannis is about 35 minutes south of us—with its ferries to Nantucket and Martha’s Vineyard. You might be renting a place in New England if one of the kitchen amenities listed is a lobster pot!

I also have extended family in Fall River, MA; Westport, MA; Swansea, MA; Assonet, MA; and Tiverton, RI (all within about an hour-and-a-half of us) who we’ll try to safely visit during our month here, since none of them have ever met Bob.

This is the first of daily blog entries I’ll make to remember our experience.

We had our alarm set for 3 a.m., but at 2:20, we both realized neither of us was going to fall back asleep, so we just got up, had some cottage cheese for breakfast, finished packing the very few things we didn’t pack last night, and got on the road some time between 3:30 and 4:00.

Reason #263 that it’s a good thing neither of us has kids, because there really wouldn’t have been room for any of their stuff. The car was packed to the gills. 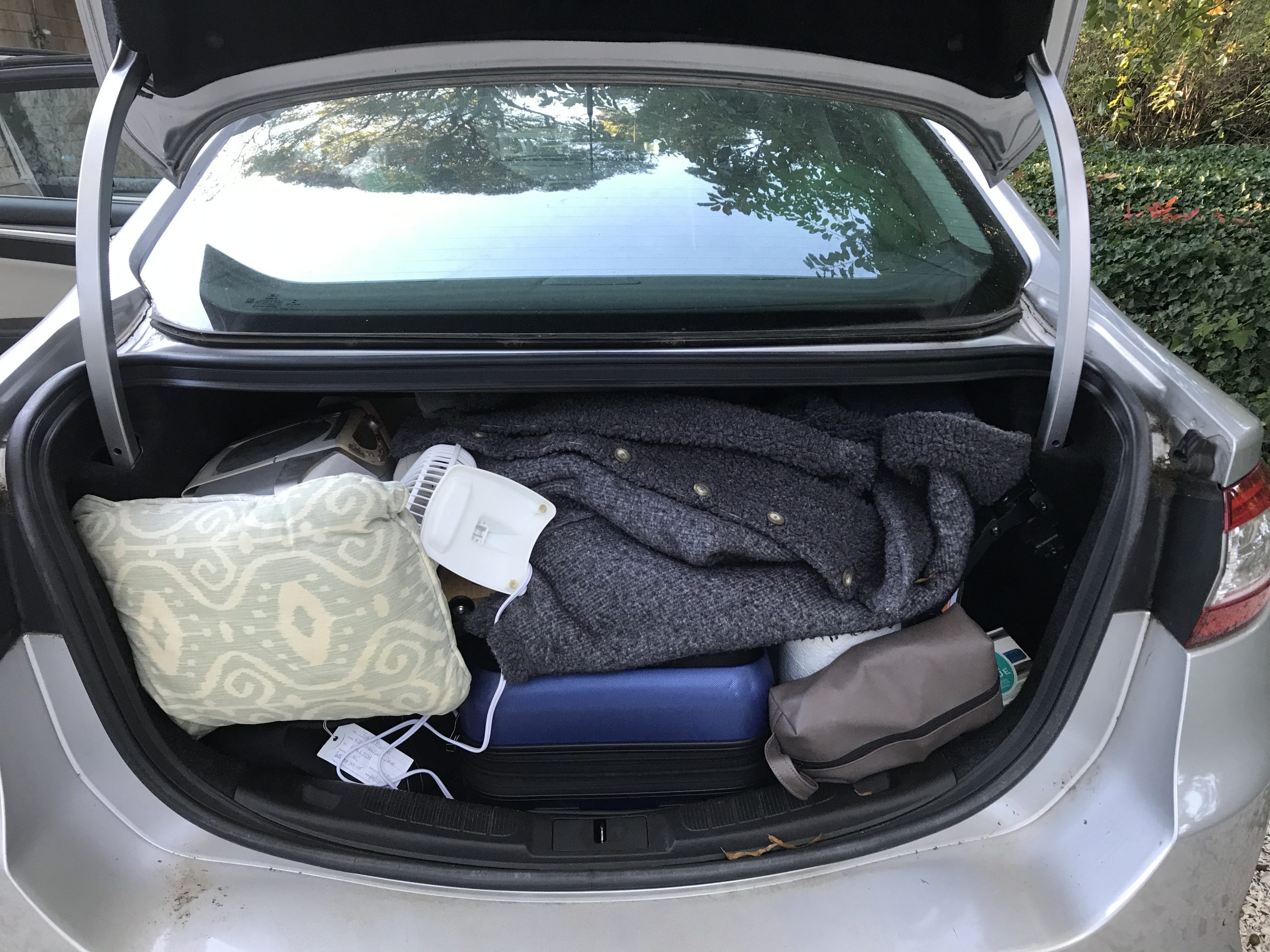 Maximum back seat spaced use 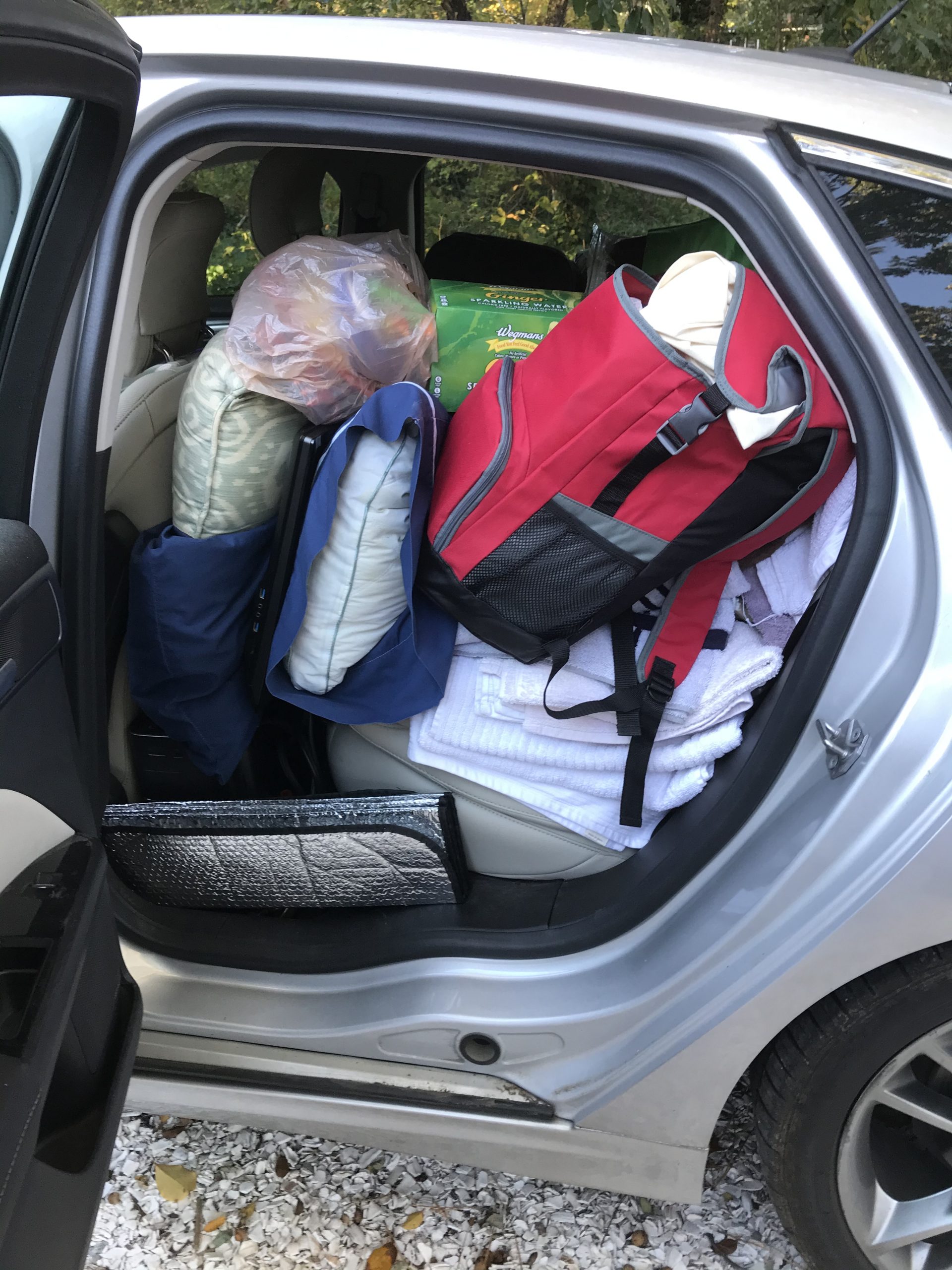 Just enough space for Bob to sit in the passenger seat 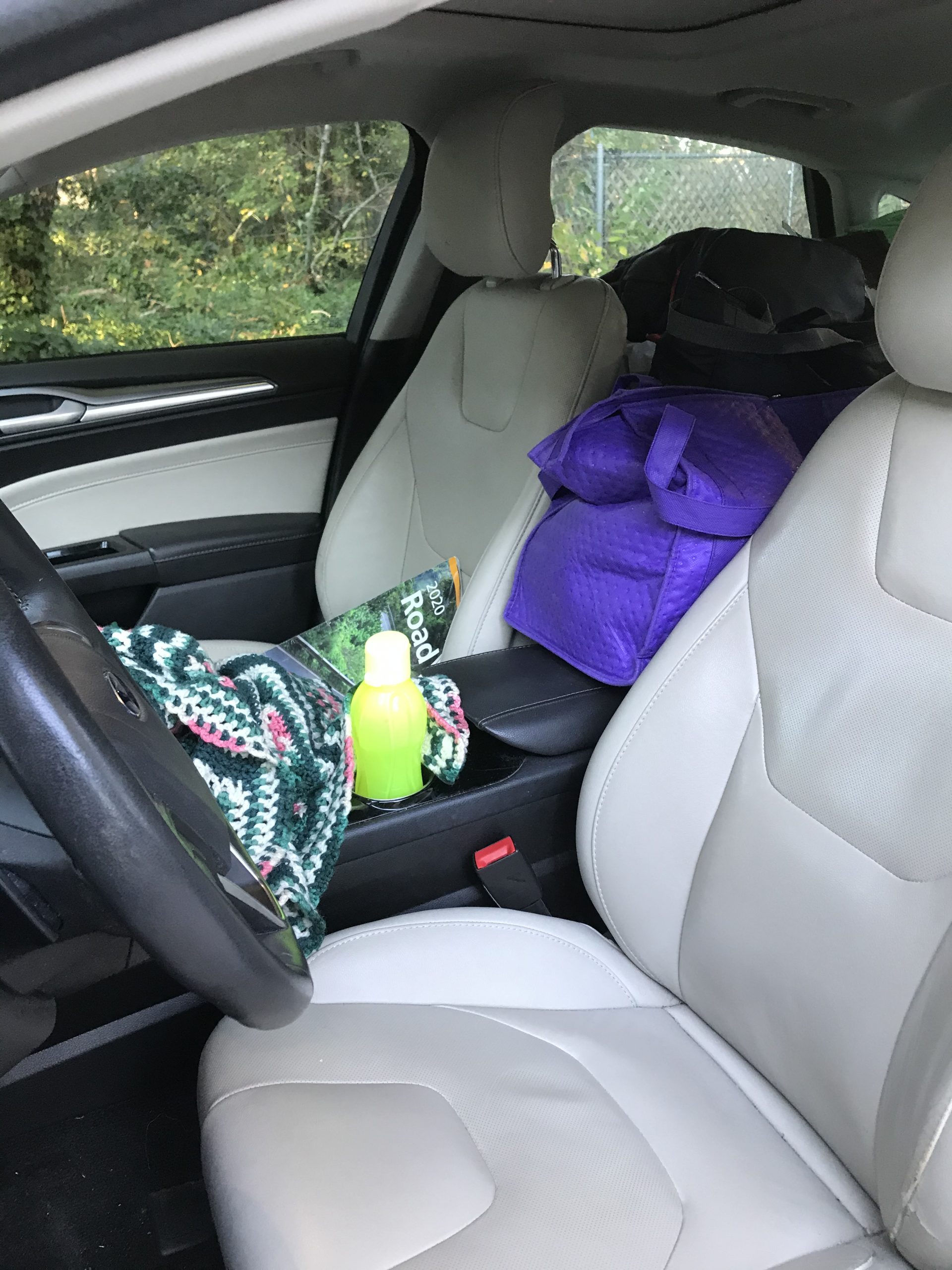 Bob had planned food for us to eat en route, and the highlight was peanut butter and jelly sandwiches and homemade banana bread. We enjoyed this at a rest area in Maryland at about 9:13. It seems early for a lunch, but since we’d started out at 3 in the morning, it was apropos. 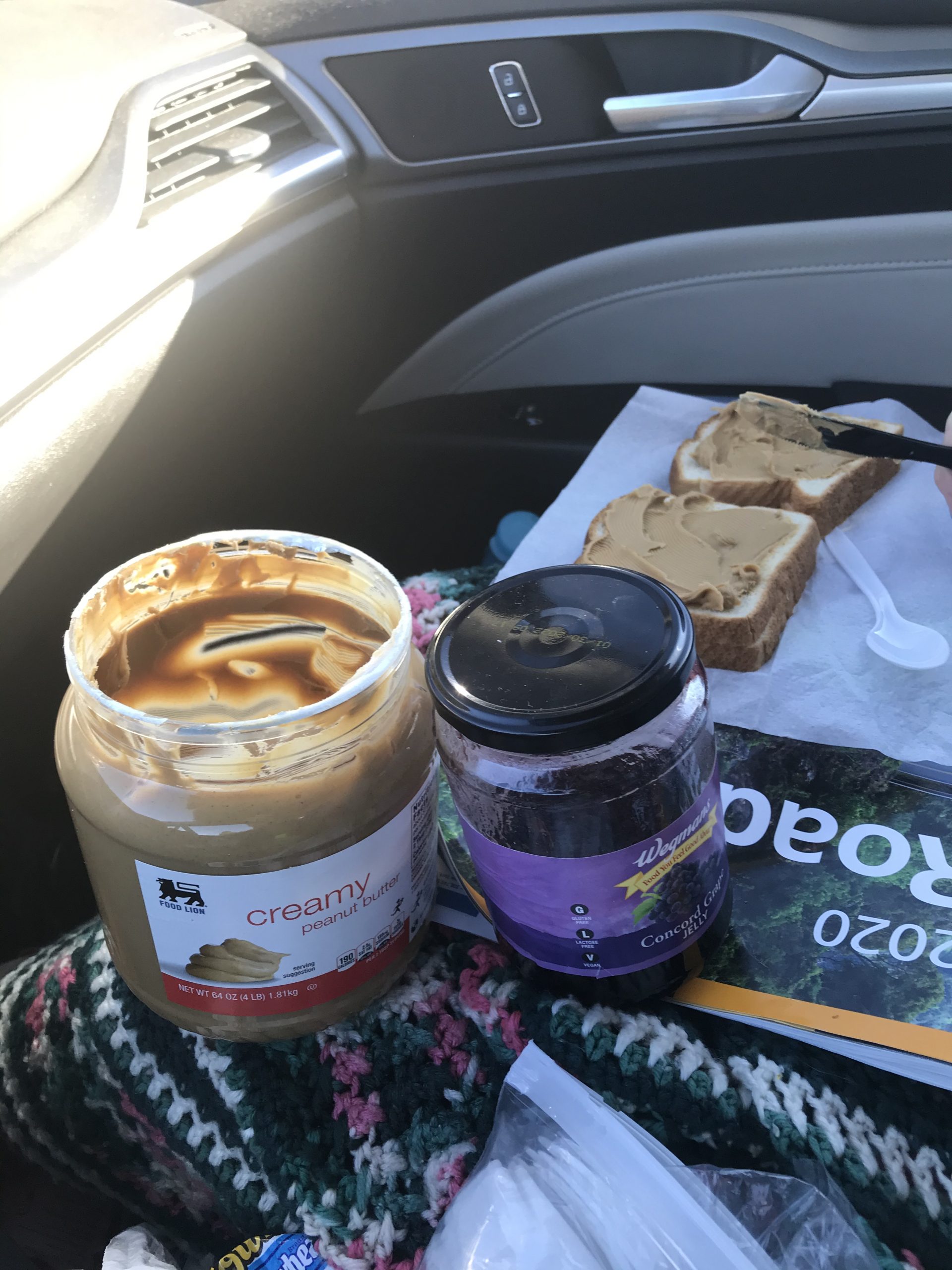 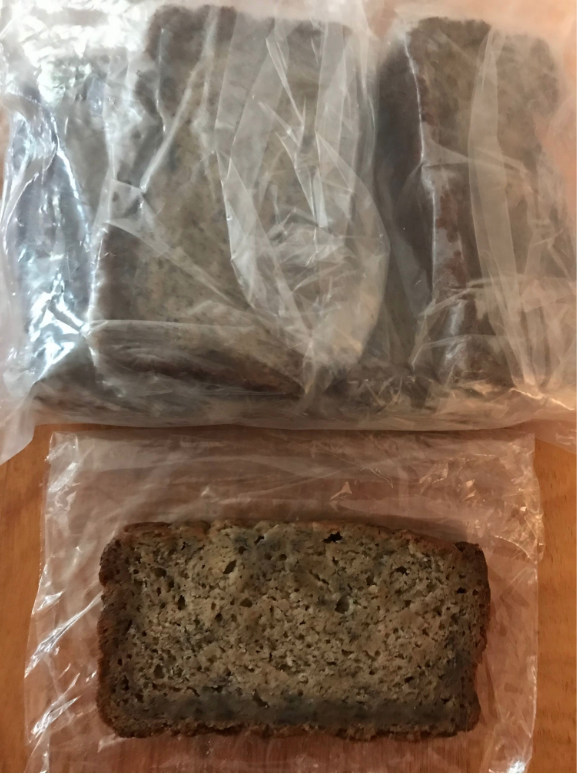 We made 3 stops along the way, and we were surprised, and pleased, at the vast majority of people that were wearing masks at the rest stops and gas stations.

The first toll road we approached had all the signs intact about stopping to pay your toll, but when we got to the booth, it said to just keep on going. We didn’t know if they weren’t collecting tolls because it was Saturday, or because they didn’t want to staff the booth because of COVID-19, or what.

Getting on the New Jersey Turnpike, the “NO EZ-Pass” lane we got in flashed yellow lights (from green) after we’d already chose the lane, and when we got to the booth, it wasn’t staffed, and a digital sign flashed: “No tag scanned. Keep moving.” Our booth/lane looked just like the 2 on either side of it at which we saw a driver take a ticket from a machine as they went through. Since there was no machine from which to take a ticket at ours, we just kept going and no one chased us or stopped us. At the end of the turnpike—I’m pretty sure we went the entirety of it—I told the cashier we didn’t get a ticket, but that we’d entered at the Delaware Bridge, and she charged us $18 and some change, which was the price indicated for a “lost ticket.” Whatever.

There were definitely more tolls than we anticipated. We paid $18.85 to go over that unimpressive George Washington Bridge, on which they could use some of the money they’re collecting to repave, if you ask us.

And a few of the toll booths were pay-by-mail booths where they scanned our plates, I guess. We’re concerned that we’re not going to see our mail for over a month. We need to look up how long you have to pay them before they start accruing late fees or fines. We can’t even ask our neighbors to be on the watch for them, because our mail is being held at the post office until Nov. 14.

We did hit a highly annoying snag on I-95N through NY, where we experienced bumper-to-bumper traffic for about 45 minutes to an hour. And it was one of those situations where traffic would just come to a crawl or stop for no obvious reason whatsoever. After some time, it would pick back up—with no accident or any other thing in sight that might explain the slowdown—and then again after some time slow down again for no apparent reason. At what point we said:

We arrived at about 4:30 p.m., which was 13 or 13.5 hours after we left. I’m not sure how this tripmeter on our car calculates time, but it seems to be an hour or so off. The mileage seems correct, as Google maps estimated between 761 and 821 miles. 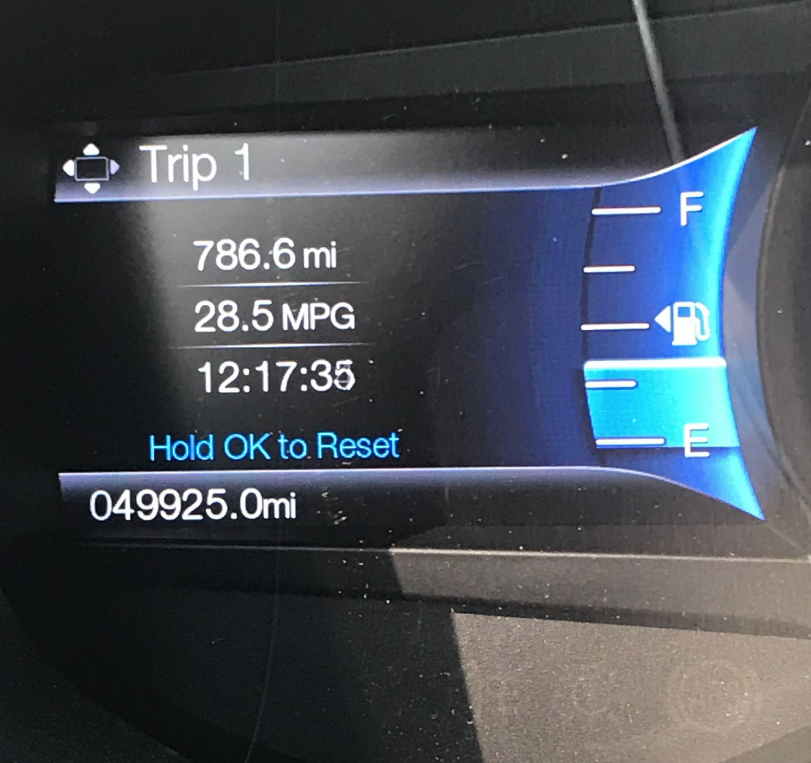 Because we were ready for a celebratory drink after a day on the road, the first thing we did was set up the bar in the place and have a toast to the start of our month-long adventure. 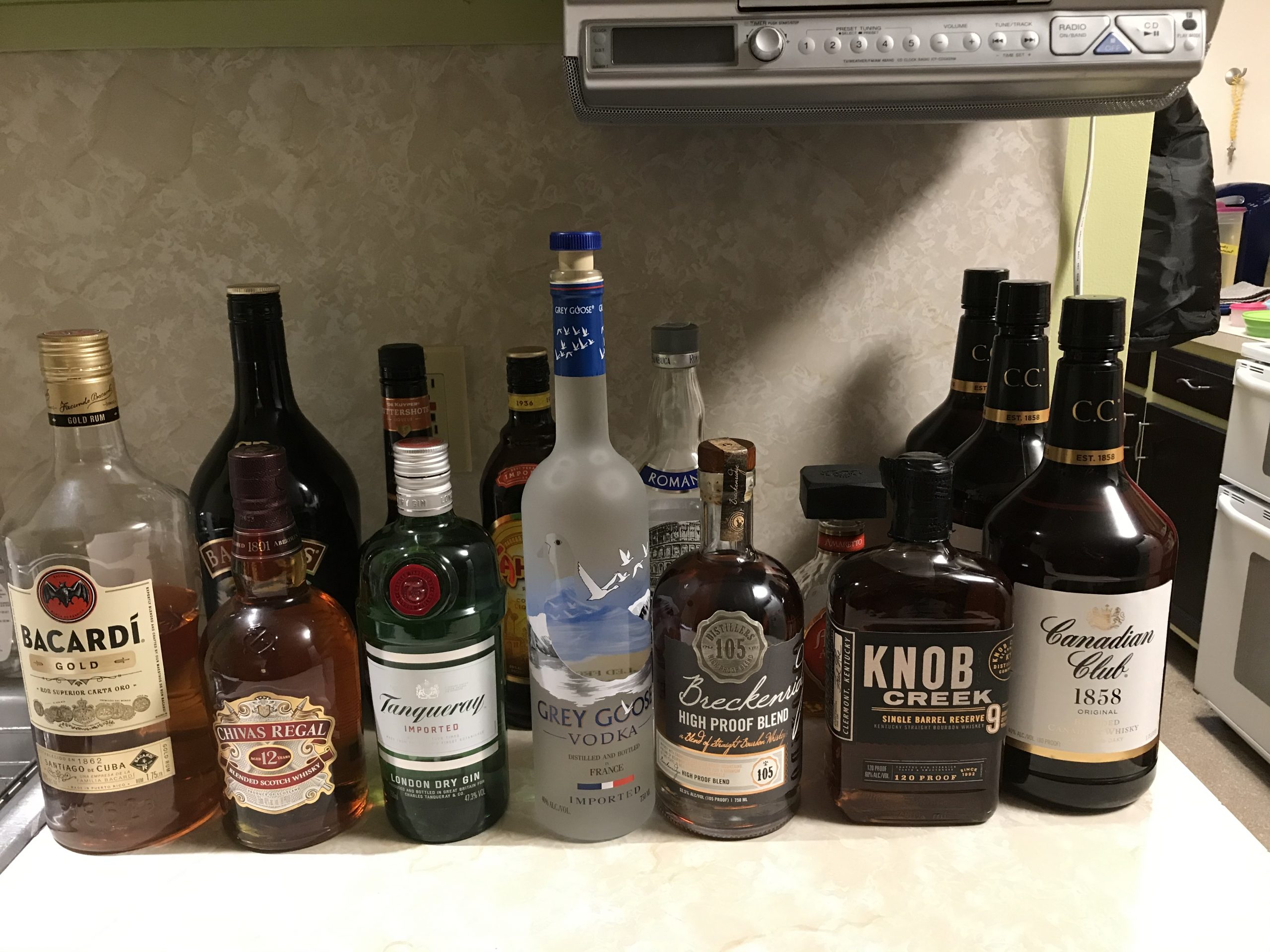 There were two (frozen, Red Barron, pepperoni) pizzas left in the fridge, and we had one of those for dinner after checking with the owner that it was okay to eat them.

Bob made up our bed, and I laid down on it at about 8:30 and started reading a book on my phone on Libby. The next thing I knew, it was 5:00 in the morning Sunday.

Hopes and dreams for tomorrow

Comments are welcome about this entry in the form below. | Read our day 2 entry.
Note: Comments won’t appear right away as I have to approve them to avoid spam and trolls.